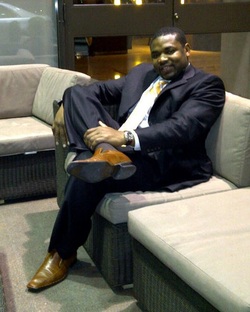 Aubrey was born in Georgetown Guyana and immigrated to Canada as a young boy.   Aubrey worked with children for a number of years. He worked as a Youth Leader for the City of Toronto's Parks and Recreational Programs and as a Community Youth Leader and mentor at one of Toronto's largest evangelical churches.

Sam & Rita Burke, Aubrey's uncle and aunt were both educators and opened one of Canada's largest African / Caribbean and Multicultural bookstores.  That was where Aubrey fell in love with children's literature.  Through selling books to schools, childcare centres, teacher conferences, and community events Aubrey's passion for children's literature grew; He was already writing poetry and performing spoken word across North America then fell into storytelling naturally.

"Fly Little Black Bird Fly", was written in 1998 after Aubrey attended his first Harry Jerome Awards. There he was inspired to write a story that would touch, effect, empower and change lives positively.

Aubrey, a man of many talents also wrote the lyrics to the song "Fly Fly Way Up High", that is featured in "Fly Little Blackbird Fly."

In 2001, Aubrey left telecommunications and ventured into radio where he worked as an Account Executive at Canada's first Urban Radio Station.
He later started his own media/ media sales and marketing company and is currently under contract with one of Canada's largest independent radio networks as the Director of Business Development. He was instrumental in helping to secure a broadcast license for Canada's first all Blues radio station.

Aubrey also sits as a Director on the board of the "Enhanced Literacy for Life Charitable Foundation."
He is also an Independent Marketer partnered with North America's largest Energy Company and is a partner in Pre-Eminent Enterprises a events company.

Stay tuned to this website for the sequel to "Fly Little Blackbird Fly" and to hear about his other upcoming titles.